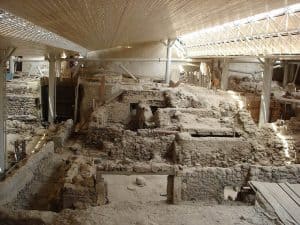 Among the sights of Santorini, the prehistoric settlement discovered in Akrotiri keeps its sights. It is one of the most important archaeological sites in the Aegean.
It is located at the southwest end of the island and is 15 km from Fira. Excavations there began systematically in 1967.
Some of the finds can be admired at the Prehistoric Thira Museum, in Fira.

The first facilities in Akrotiri date from the Late Neolithic Age (at least from the 4th millennium BC). Settlement was in the Early Bronze Age (3rd millennium BC). In the Middle and Early Late Bronze Age (20th-17th century BC) the settlement expanded and became one of the most important urban centers of the Aegean.
Its development is evidenced by the large area it occupied (about 200 acres), its excellent urban planning, the sewerage network and the elaborate, multi-storey buildings with stunning frescoes, rich furnishings and homework.
Imported products found inside buildings show how good the inhabitants of Akrotiri were in … public relations. They maintained strong ties with Minoan Crete and trade relations with Mainland Greece, the Dodecanese, Cyprus, Syria and Egypt. Life in the city ended abruptly in the last quarter of the 17th century. century, when the inhabitants abandoned it because of strong pre-tensions.
The eruption of the volcano followed, and the volcanic materials that covered the city and the whole island protected today their buildings and their contents. Figures for the habitation of Cape and other places in the prehistoric age began to come to light from the second half of the 19th century.
The systematic excavations began in 1967 by Professor Spiros Marinatos. After his death, in 1974, Professor Christos Doumas took over the direction.

Whether you’ve never tried windsurfing before or are confidently shredding waves, our windsurfing center welcomes anyone and everyone in Avis Beach, Santorini, Greece